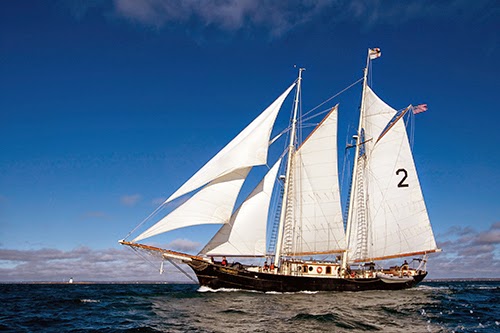 Tabor Boy: 100 Years at Sea is a documentary that profiles the captivating history of the Tabor Boy sail training program in which thousands of high school students have experienced the lifelong lessons of going to sea. Rhode Island PBS is pleased to present this documentary on Sunday, December 28 at 9 p.m.


Celebrating her 100th year at sea, Tabor Academy’s flagship 92’ sail training schooner, the SSV Tabor Boy, and the sail training program onboard, is the subject of a film by Emmy award-winning videographer and Tabor Academy alumnus John Rice of Above the Line Programming.

To learn about the Tabor Boy sail training program and its history, Rice did hours of research before joining the Tabor Boy captain and crew onboard last summer during the school’s new student orientation voyages around Buzzards Bay. Rice also sailed on a student research trip last winter to the Caribbean. Rice captured beautiful footage of local sailing waters and of sailing and diving in the clear waters of the Caribbean. Beyond scenic sailing footage, however, are powerful stories of accomplishment and leadership being taught through the Tabor Boy sail training program.


The documentary also follows the tall ship schooner on its open ocean journey in heavy seas, sailing from the New England south coast to Bermuda and eventually the United States Virgin Islands. In bays all across the USVI island of St. John, more than 700 Tabor students have conducted real-life marine science research, in conjunction with the U.S. Geological Survey, by diving, analyzing, and tracking the health of the Elkhorn coral species. The students’ research, conducted over 15 years, has led to the designation of Elkhorn coral as an endangered species.


Head of School John Quirk states, “Tabor Academy recognizes the value of our seaside location to enhance student learning in the broadest sense. The Tabor Boy program has played a major role in our school-by-the-sea heritage since 1917. It is a slice of American sailing history; a story about adventure and of real life lessons learned. The film shares our school’s mission in a clear and enduring way, and we are grateful for the opportunity to share it with the public.”

“We’re pleased to bring this local story to our community,” said WSBE Rhode Island PBS President David W. Piccerelli. “The Tabor Academy sail program is unique to the school but this film captures the spirit of the program in a way that is of interest to all.”

The film cleverly weaves the history of the schooner program at Tabor with the current program, masterfully sharing some unique old photographs and stories of Tabor’s past vessels and their captains, alongside recent footage of today’s schooner powerfully sailing offshore in heavy seas with her competent captain and student crew.

About John Rice
John Rice is an alumnus of Tabor Academy and the principal of Above the Line Programming. Above the Line Programming Group is a full-service creative production company based in Hingham, MA. For more than 30 years, the company has produced over 350 hours of engaging programming for network, cable, digital, commercial, non-profit and business television outlets. President and Executive Producer John Rice has won and been nominated for multiple Emmy Awards for his work with Above the Line. For more info go to (www.abovethelineprogramming.com)

About Tabor Academy
Tabor Academy is an independent, co-ed, boarding and day school for grades 9-12 featuring a broad-based, challenging college preparatory curriculum including the arts and competitive athletics, as well as unique marine and nautical science programs. The SSV Tabor Boy is one element of the nautical science program and its sail-training program is the only one of its kind among independent schools. For more information about Tabor Academy or the SSV Tabor Boy, please visit www.taboracademy.org.