Look at the HIDDEN ASSETS Beneath Your Feet

Beneath our feet runs the unseen, complex network that powers our lives.
And it's crumbling. 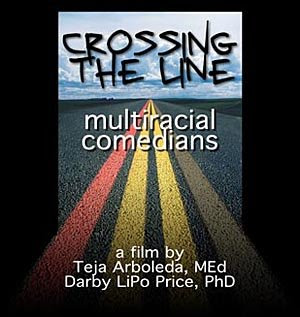 With Barack Obama in the Presidential race, mixed-race issues, diversity, and the politics of language have come into focus. They are essential things to consider with respect to freedom of speech.

Teja Arboleda's documentary, Crossing The Line: Multiracial Comedians is a timely one-hour documentary on race and humor, and who gets to say what. It airs tonight at 9PM - and it's the film's television premiere! It will be available to other PBS stations nationwide in November.

"The day I arrived in LA in November of 2006 to begin shooting this documentary, television’s Seinfeld star Michael Richards lost his cool to hecklers and retaliated with the ‘N’ word. Subsequently, Rosie O’Donnell, Don Imus, Senator McCain and others continue to cross the line without real consequence.

In today’s world of race-relations, immigration and entertainment, the ultimate question is: where is the line, and who can cross it?

Exploring these questions exposes the very nature of where pain and laughter come from in a racially divided world. Caught in the cross– fire are millions of bi-racial and multiracial Americans, and competing against the mainstream on all counts, humorists and comedians provide meaningful insight into what really divides us.

He was AD/Editor for FRONTLINE, Say Brother (received an EMMY Award), and La Plaza at WGBH-TV (PBS), and produced for Chronicle on ABC (New England). He created, directed and starred in Ethnic Man!, and the six part educational series Diversity Elementary, both of which aired on PBS.

He has performed over 500 comedy shows on race and ethnic issues throughout 48 states, and is the author of In The Shadow of Race. Arboleda is Assistant Professor of Digital Media and Communications at The New England Institute of Art.