The Bee champion won the top prize of a $25,000 college scholarship and lifetime membership in the National Geographic Society. Second-place finisher, Oliver Lucier of Wakefield was awarded a $15,000 college scholarship. Third place finisher receives a 10,000 college scholarship. Additionally, the national winner will travel (along with one parent or guardian), all expenses paid, to the Galápagos to experience geography firsthand through up-close encounters with the islands' wildlife and landscape. Travel for the Galápagos trip is provided by Lindblad Expeditions and the National Geographic Society.


The 54 finalists, all winners of their state-level geographic bees, have triumphed over a field of nearly 5 million students to earn a place in the national championships. They represent the 50 states, District of Columbia, Atlantic Territories, Pacific Territories and Department of Defense Dependents Schools.


The preliminary round of the National Geographic Bee took place on Tuesday, May 25. The top 10 finalists each won $500 and advanced to the final round on Wednesday, May 26, which was moderated by "Jeopardy!" host Alex Trebek.

Will You Be 'Walking With Dinosaurs'?

Dinosaurs once again roam the earth in a spectacular theatrical arena show, Walking with Dinosaurs – The Arena Spectacular, based on the award-winning BBC Television Series, and coming to the Dunkin Donuts Center in Providence on Wednesday, June 23.

Internationally renowned designers have worked with scientists to create 15 life-size dinosaurs - including the terror of the ancient terrain, Tyrannosaurus Rex. Audiences are amazed and thrilled as the greatest creatures ever to walk the earth return before their eyes. The largest creature is 72 feet from nose to tail; the T-Rex is 18 feet tall at the shoulder!

It’s a dazzling 10 million pound arena spectacle of unprecedented size and quality, set to captivate young and old alike. The show combines of a rich sensory experience woven into a story of dinosaurs' 200 million year domination of life on earth. Watch them walk. Hear the roar. Be there as they fight for survival and supremacy. From the ripple of their skin to the glint in their eye, you will know the dinosaurs really have returned!

Through an agreement with promoters, WSBE Rhode Island PBS has great tickets to this amazing family experience at the Dunkin Donuts Center! To whet your curiosity, we will air The Making of 'Walking with Dinosaurs' a behind-the-scenes look at how the animators, sculptors, and palaeontologists, using the latest state-of-the-art animatronics and computer graphics, collaborated to re-create these pre-historic behemoths - and their behavior as well.

Starting May 19 and through June 12, WSBE presents several opportunities for you to get tickets and support Rhode Island PBS, too. Tune in to watch The Making of 'Walking with Dinosaurs' on these dates:


Here's a video clip about the live show: 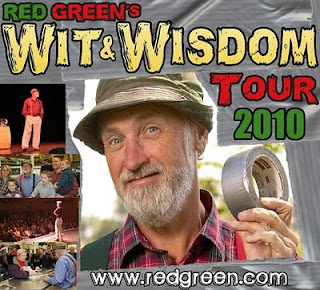 Red Green will bring his one-man show – The Wit and Wisdom Tour – to Providence, Rhode Island, this summer.

Red Green has more surprises planned for east coast fans, too. More details will be "unrolled" as summer approaches.

About The Red Green Show
Red Green (Steve Smith), is a Canadian handyman who generally tries to find shortcuts to most of his projects, trusting the vast majority of his work to duct tape (which he calls "the handyman's secret weapon" and the "universal adapter"). He is the president of the Possum Lodge, a fictional men's club in the small northwestern Ontario town of Possum Lake, near the also-fictional town of Port Asbestos. He and his fellow lodge members have their own cable TV show, in which they give lessons and demonstrations in repair work and outdoor activities (such as fishing and camping), and advice for men on relating to women.

The cable TV show (the show withing the show, actually) is taped in part on a hand-held camera by Red's nephew, Harold. The show's structure evolved over time and included several regular segments that appeared in almost every show. These segments were interspersed with each episode's three main plot segments, and they included such staples as the "Possum Lodge Word Game," "Handyman Corner," and "Adventures with Bill" (a slapstick home movie-style sketch with a voice-over by Red).

The series, which began in 1990 and ended in April 2006 with its 300th episode in its 16th season, currently runs on PBS stations across the United States, including WSBE Rhode Island PBS.


About Steve Smith
Steve Smith, who plays the title character Red Green, was born in Toronto, Canada and raised in the suburbs to the west. Steve had a variety of occupations while attending high school and college; he worked as a steam fitter, a car jockey, a postman, a lab technician, and an elementary school teacher.

Although the entertainment business had always been a weekend hobby, Steve went full time in 1981 when he began touring Canada and the U.S. in a rock band called Jason. In 1974, he and his wife left the band to form the comedy duo of "Smith & Smith," opening for such entertainers as Rick Nelson, Roy Orbison, Al Martino, Helen Reddy, Martin Mull, and more. In 1978, "Smith & Smith" began a successful run on Canadian television with their own series which ran for nine years. It was during this period that Steve's most popular alter ego "Red Green" was created. Steve wrote and produced all 195 episodes. "Smith & Smith" won several awards including the Iris Award at NATPE '85 in San Francisco.

Expanding from "Smith & Smith," Steve wrote and produced 26 episodes of "Me & Max,” followed by 60 episodes of "The Comedy Mill," winning a Gemini Award for the latter. In his spare time he was head writer of a 13-episode series called "Laughing Matters" for the Global Television Network and wrote a pilot called "Out of Our Minds" starring David Steinberg for Tribune Entertainment. As a slight departure, Steve wrote for 3 episodes of "Top Cops" for CBS International.

In "The Red Green Show," Steve stars in, produces, and co-writes the show with ex-Frantic Rick Green. Steve is currently on a busy schedule of promotional appearances and production duties, as well as answering letters from "The Red Green Fan Club."

Wednesday, May 5 at 7 PM, Costantino's Round Table launches a new season of episodes. This week's show, "In-Home Kitchen Design," discusses the latest trends and design features of the family kitchen.

Join hosts Joe Zito and Alan Costantino, and their guests Johanne Killen and George Germon, chefs and owners of Al Forno, as well as Ken Gillis from Viking Designer Kitchens. The program features George and Johanne's kitchens in their homes in Little Compton, Pawtuxet Village, and Provence, France.


Next week (May 12) Costantino's Round Table takes a look at our love affair with diners. Alan Costantino and Joe Zito welcome Richard Gutman, curator of the Culinary Archives and Museum at Johnson & Wales University, and Seaplane Diner owner David Penta.

Mr. Gutman is one of the country's foremost experts on the history, architecture, and culture of diners. He is the author of "American Diner Then and Now." Mr. Penta is a Providence restaurateur who purchased the Seaplane in 2003. The diner has been serving its fare on Allens Avenue in Providence since the early '40s.

~*~*~*~*~*~*~*~*~*~
Costantino's Round Table is hosted by Alan Costantino, owner of Venda Ravioli in Federal Hill, and by Joe Zito, food critic and host of TV Maitre d', and airs Wednesdays at 7 PM on WSBE Rhode Island PBS.