Palliative care is specialized medical care for people with serious illnesses. It focuses on providing patients with relief from the symptoms and stress of a serious illness. A specially-trained team of doctors, nurses and other specialists work together with a patient’s other doctors to provide an extra layer of support. Palliative care is appropriate at any age and at any stage in a serious illness and can be provided along with curative treatment. The goal of palliative care is to improve quality of life for both the patient and the family.

In-studio conversations with local professionals from The Miriam Hospital, Home and Hospice Care of Rhode Island, and Visiting Nurse Home Care (formerly Visiting Nurse Service of Greater Rhode Island) are interwoven with the pre-taped personal story segments. Throughout, doctors, nurses, therapists, and social workers reveal how they formulate a plan to ward off side effects of treatments and deal with symptoms, allowing patients to live more comfortably and at home.
“Personal stories like this one connect each of us,” said David W. Piccerelli, president of WSBE Rhode Island PBS. “We’re pleased to make these unifying connections in the community, and to advance awareness and understanding through our series of health education specials this past year.”

Part of SCREENINGS | community conversations about cancer, an initiative of Rhode Island PBS and the American Cancer Society, Living with Dignity is made possible by CVS Health. For more information about the organizations featured in the program, visit ripbs.org.

Scott, who recently won a British Academy of Film and Television Arts award for his portrayal of Holmes’ nemesis Moriarty, plays Mark Nicholas, a man who returns home to the fictional town of Renton following the joint suicide of his parents. After having been away for ten years, however, Nicholas struggles to reconnect with those he had left behind – including his family, friends, and former sweetheart, who is now married with a child. McKenzie plays his grandmother, Betty; Riley is his first love, Alice; and Clunes is the town’s alcohol-soaked mayor, Len.

The Town is written by award-winning playwright Mike Bartlett and produced by Big Talk Productions, the company behind Rev, Friday Night Dinner and Him & Her.

Fans of David Lynch’s ‘90s drama, Twin Peaks may find a similar quirkiness. Renton, however, is spookier than Twin Peaks, although filled with as many secrets.

“Often those closest to us hide their problems,” explained the mysterious Inspector Franks (Douglas Hodge) when Mark suggested that his parents might have been murdered.

The atmosphere of menace and melancholy never dissipates, and Bartlett is brilliant at showing how shock reveals the weirdness of normality.

As Providence Would Have It, inCommon with Mike Leonard Comes to Rhode Island PBS

On Monday, June 8 at 7 p.m., Rhode Island PBS premieres a new 4-part series, inCommon with Mike Leonard, the 30-year veteran correspondent for NBC’s Today Show. Leonard describes the program as “things we have in common as human beings and common things that we sometimes overlook that have great value but are hidden in plain sight.”

One of the four episodes is entitled "Providence" and it’s as much about the definition as it is about the location. “Providence” will air on Monday, June 15 at 7 p.m. 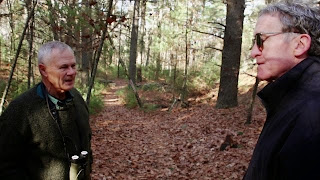 inCommon with Mike Leonard features ordinary people making an extraordinary impact in locations across the United States, in Africa, the Middle East, and elsewhere in the world. Filmed with innovative cinematography, Mike weaves wisdom and wit into each episode while keeping the spotlight on the triumphs and tragedies of ordinary people and their extraordinary stories. Mike shows it’s the stories we tell in life that truly connect us. They are what we all have in common.

Episodes are built around themes of time, providence, acceptance, and hope:

Time (Rhode Island PBS on June 8 at 7 p.m.; Learn on June 30 at 9 p.m.)
Acclaimed for tapping into the everyman experience, Mike unreels a compelling home movie segment, reflecting how his camera allowed him to access the story of life we all share, and to slow down time by recording it. This premier episode also profiles a humble Phoenix high school coach who spends his time instilling character in competitive athletes; takes a humorous look at parents finding the meaning of childhood moments in failed attempts to frame them; and shows generations of a family who pause the passage of time, only to watch it begin again.

Providence (Rhode Island PBS on June 15 at 7 p.m.; Learn on June 30 at 9:30 p.m.)
inCommon visits Providence, Rhode Island, to explore life's providential twists and turns through the intertwined lives of college students of the 1960s, Vietnam veterans, and the Providence College hockey team.

Acceptance (Rhode Island PBS on June 22 at 7 p.m.; Learn on June 30 at 10 p.m.)
Life is about accepting ourselves, unfamiliar cultures, different races, new ideas, change. But can a tony suburb on Chicago's north shore accept the unconventionality of grown men playing wiffle ball in Mike's front yard every Sunday -- in a makeshift ballpark he created himself? inCommon also visits Uganda for perspective on how one aspiring filmmaker confronts cultural, technological, and geographic obstacles. In Israel, Arab and Israeli children bond as teammates in a sports camp set amidst swirling sectarian violence just outside their oasis of peace. Winnetka to Uganda to Israel -- Mike connects the journey across continents with the common ground of sports, friendship, creativity and play.

Hope (Rhode Island PBS on June 29 at 7 p.m.; Learn on June 30 at 10:30 p.m.)
Hope abides in the hearts of those who believe they will find their way home to their dreams. With a goal in sight, the hopeful recognize landmarks pointing the way, opportunities to open the path they seek. Hope - plus attention and active engagement in finding a way - lead to the realization of dreams. Mike's father pioneers overnight delivery before its time -- from Ireland to Phoenix to Chicago -- trusting a stranger on a plane to deliver the touchstone to Mike's career. These touchstones begin with a movie camera that comes to connect Mike to TV, his son Matt to opportunity for an aspiring African artist, his son Brendan to his own show at age 19, and his mother to hope despite devastation, then offering hope to grieving parents in Memphis. 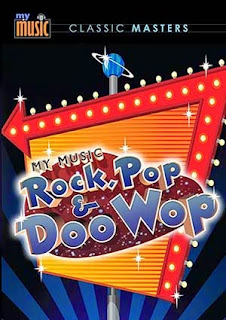 Rock and pop legends Jon "Bowzer" Bauman(formerly of Sha Na Na) and Ronnie Spector (The Ronettes) bring back the best songs from the late 1950s and early 1960's rock, pop and doo-wop era in a "MY MUSIC" concert event on Rhode Island PBS on Wednesday, May 20 at 8 p.m.

This special, recorded in May 2010 at Pittsburgh's Benedum Center, includes live performances and rare, never-before-available archival classics from the Dick Clark vaults in a formula that makes the My Music series so popular.

Other highlights from the '60s pop-rock era include Jay Black (formerly of Jay & The Americans) delivering his show-stopping smash "Cara Mia" plus a rare appearance by Len Barry, who serves up his number one hit "1-2-3."

The complete list of featured songs and performers include:
“Yakety-Yak”/“Charlie Brown” – Carl Gardner’s Coasters;
“Can't We Be Sweethearts” - The Cleftones;
“Silhouettes” - The Rays;
“I Love You So”/ “Maybe” – The Chantels;
“Blue Moon” – The Marcels;
“Step By Step” - Johnny Maestro & The Crests;
“Rhythm of the Rain” – John Gummoe (of The Cascades);
“Book Of Love” – The Monotones;
“A Little Bit Of Soap” – The Jarmels;
“A Thousand Stars In The Sky” - Kathy Young;
“Lovers Concerto” –Barbara Harris & The Toys; Platters’
Greatest Hits -Sonny Turner (medley: “Only You,” “Great Pretender,” “Twilight Time,” “Harbor Lights,” “Magic Touch,” “My Prayer,” “Smoke Gets In Your Eyes”);
“1-2-3” - Len Barry;
“Wah-Watusi” - The Orlons;
“Venus in Blue Jeans” - Jimmy Clanton;
“Will You Love Me Tomorrow” - Shirley Alston Reeves(original lead singer of The Shirelles);
“Cara Mia” -Jay Black (originally with Jay & The Americans);
“Baby I Love You” - Ronnie Spector;
“Be My Baby” -Ronnie Spector;
“Da Doo Ron Ron” - La La Brooks(originally with The Crystals);
“Then He Kissed Me” -La La Brooks (originally with The Crystals);
“Get A Job” - The Silhouettes;
“Looking For an Echo” -Kenny Vance & The Planotones.

This program is part of our June Membership Campaign. Support quality programming you depend on from WSBE Rhode Island PBS. 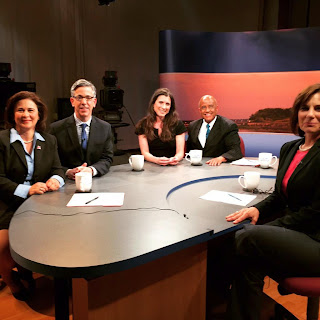 One in four Americans has a diagnosed form of mental illness, but two out of three don’t seek help because of a perceived stigma. Since 2009, PeaceLove Studios in Pawtucket has offered help to thousands through expressive art.

This month Jim Hummel and Rhode Island Spotlight takes a look what happens when people step inside the studio doors.

Powerful Symbol will air on Rhode Island PBS on the following dates and times.

Dear Subscribers:
An update to A Lively Experiment blog post from 2011 inadvertently posted as a "new" blog. We regret any confusion or inconvenience this may have caused.

THIS is the information for the most current episode of A Lively Experiment, which airs Friday, May 8, 2015 at 7 p.m., and Sunday, May 10 at noon.

Please feel free to contact us if you have any questions. Thank you!

Posted by WSBE Rhode Island PBS at 9:25 AM 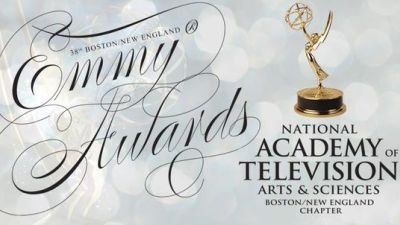 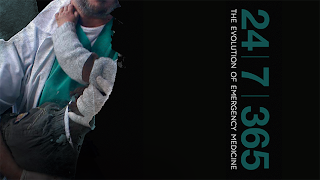 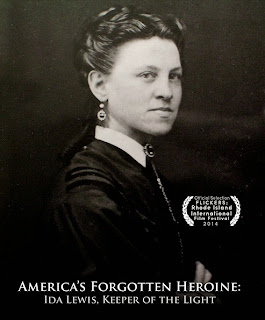 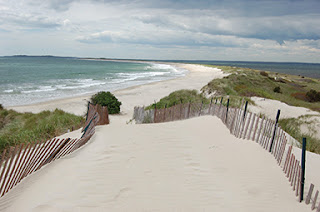 RI Commerce Secretary on this week's A Lively Experiment April 30, 2015