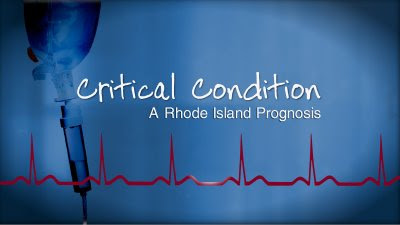 Since 2002, the number of Rhode Islanders without medical insurance has doubled. Why? Who are Rhode Island's uninsured? Where can they turn for coverage? Why does it cost so much?

Overall, the picture painted by these experts is not very encouraging but, considering the national debate, it should come as no surprise. What may be surprising to viewers are some of the myth-shattering facts about health care and medical insurance in RI. Plus, there are a few bright spots presented, even if they will not materialize overnight.

WJAR NBC10 Health Check Reporter Barbara Morse Silva expands on some of the issues raised in the documentary in a probative discussion with Dr. David Gifford, director of the RI Department of Health; John Cogan, executive assistant for Policy and Program Review in the Office of the Health Insurance Commissioner; and Rajiv Kumar, founder and chairman of Shape Up RI. The lively discussion also examines the availability of health care services in Rhode Island, doctor’s fee-for-service incentives, the importance of preventative health care, the health care costs and outcomes of other countries, and the future of health care in RI.

Following the local perspective, Rhode Island PBS presents the national documentary from P.O.V., Critical Condition, at 9 P.M. Roger Weisberg (Waging a Living, P.O.V. 2006) puts a human face on the nation's growing health care crisis by capturing the harrowing struggles of four critically ill Americans who discover that being uninsured can cost them their jobs, health, home, savings, and even their lives. Filmed in verité style, Critical Condition offers a moving and invaluable exposé at a time when the nation is debating how to extend health insurance to all Americans.

At 8 PM tonight, Struggle in Steel features the monumental works of Donald Gerola, the signature sculptor of the Pawtucket Arts Collaborative. Shot on location at various places throughout Rhode Island, the film explores Gerola’s idiosyncratic creative and working process, fabricating pieces that range from intimate atrium accents to monumental monsters upwards of 40 feet.

NetWorks 2008 is actually an exhibition platform curated by Dr. Joseph Chazan and Umberto Crenca, of AS220. This exhibit highlights the work and achievement of these diverse and influential RI artists. This unique project brings together an unprecedented and diverse range of collaborating art institutions to celebrate the rich creative energy of Rhode Island.

Keep an eye out for additional episodes; there were 15 artist profiles recorded.

On Saturday and Sunday, November 15 & 16, the 2008 Latino Expo will be held at the Rhode Island Convention Center, from noon to 5 PM each day. It's a day for families, with lots of food, music, and activities - including a visit from PBS Kids Maya & Miguel. It's also a way for businesses to make connections. Rhode Island PBS will have a booth, so stop by and say hello. Want more info? There only one logical place to go: www.latinoexpoinfo.com.