The Real McCoy, the Story of the Prohibition Era’s Most Famous Rum Runner 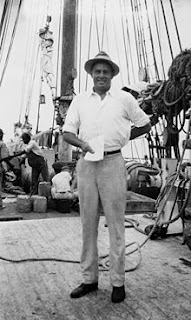 The Real McCoy, the story of the prohibition era’s most famous rum runner, premieres Thursday, November 21 at 9 p.m.

The 1920s - it was the age of prohibition, which gave birth to such iconic characters as the flapper, the private eye and the Mob boss. For many people, it was an age of opportunity.

The Real McCoy tells the fascinating story of William “Bill” McCoy, one of the most famous and respected bootleggers of the prohibition era. McCoy began as a modest boat-builder, but became a national symbol for defying the most unpopular legislation in U.S. history. He was the most wanted man in America, despite the fact that he never actually broke the law.

Born in Syracuse, New York, and a transplant to Florida, Bill McCoy loved sailing and built up a successful career as a skilled yacht builder. But during Prohibition in the 1920s, his business fell on hard times and he found that transporting alcohol could make him richer than he ever imagined. Transporting $28 cases of liquor from the Bahamas to New York, McCoy could make as much as $20,000 in profits from each trip – which was equal to five years salary for him at the time.

Docking his schooner three miles off the coast in international waters, McCoy’s ship Arethusa acted as a floating liquor store for smaller boats to come out and transport the illicit stash to the speakeasies of New York. The quality of McCoy’s spirits were as famous as his ability to transport them along New York’s “rum row.” McCoy’s whiskey, gin and rum were always uncut and of the highest quality. He never dealt in homemade moonshines, only genuine top-quality imported spirits, and his patrons loved him for it. His business practices earned him the nickname “The Real McCoy” and the expression caught on. But this gentleman crook couldn’t run from the law forever.

In November of 1923, the Coast Guard was ordered to arrest Bill McCoy, even if he was in international waters. McCoy tried to flee, but the U.S. Coast Guard Cutter Seneca pinned him in off of Seabright, New Jersey and McCoy surrendered. He pleaded guilty and spent nine months in a New Jersey jail. After he was released, he retired to his family in Florida. He was never involved in rum running again. His extraordinary life would make him a household name and forever entwine his exploits as “The Real McCoy” into the fabric of American folklore.