Set for Life: Baby Boomers Over 50 and Out of Work

Set for Life follows three Baby Boomers who struggle to recover from the devastating impact of losing their jobs during the Great Recession. Rhode Island PBS airs the documentary at 8 p.m. on November 21.

Boomers came of age during an ear of prosperity, hope and optimism. They grew up confident that their future would be guaranteed if they worked hard and followed the rules. 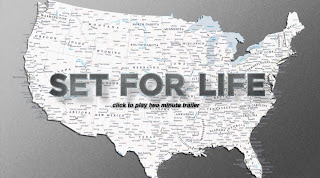 Their expectations seemed justified until the Great Recession decimated the economy and 15 million Americans lost their jobs. In clips, Baby Boomers, who are now in their fifties and sixties, express their shock and disbelief. The economic downturn shocked them by exposing that the American Dream is no longer guaranteed.

Joe Price, a third-generation steelworker from Weirton, W.V., has been laid off seven times over the course of his 25-year career in the mill, but his most recent two-year layoff, which began in 2009, appears to be permanent.

Deborah Salim from Conway, S.C. worked for 15 years in the records department at a local community college until she lost her job due to government budget cutbacks in 2008.

George Ross, a Vietnam veteran and an information technology project manager from Livermore, Calif., lost his job in 2008. He searched for work until he was notified that his son, Jason, a Marine, had stepped on a buried IED in Afghanistan while on patrol.

The three main characters they suffer financial woes, self-doubt and health concerns during through the daunting job search process that older unemployed workers face today. Thrust by the Great Recession into a quest they never expected to face at the age of 50-plus also opens deeper questions that are relevant for every individual: What defines my self-worth? What is my definition of happiness? Can I reinvent myself? Can I prepare for and accept change?

As the U.S. economy continues to falter, the themes and issues explored in Set for Life remain timely and topical not only for boomers, but for all Americans.

Brian King, one of our hundred Over 50 and Out of Work interviewees, is the narrator of Set for Life.