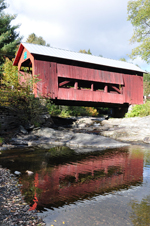 During the 19th and early part of the 20th centuries, New England was home to almost 1000 covered bridges. Today, there are less than 200 in the six state region. In Covered Bridges of New England, award-winning cinematographer Jim Karpeichik takes us on a cinematic tour of more than 75 remaining bridges - filmed in all seasons - and takes a look back at many more covered bridges that are now gone from our landscape.

There is an excellent, informative review of Covered Bridges of New England by Michael Janusonis, film critic and arts writer for The Providence Journal.

We're proud to present the Rhode Island television premiere of Covered Bridges of New England on Wednesday, March 2 at 7:30 p.m. Jim Karpeichik will be in the studio with WSBE Rhode Island PBS President David Piccerelli, and talk is likely to include some behind the scenes stories about the making of the film. 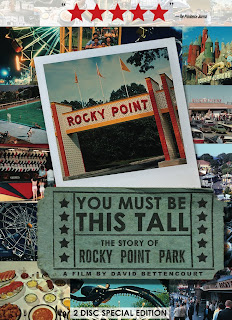 Tune in for documentary that captures the magic - and mourns the loss - of the quintessentially Rhode Island summer landmark for amusement for more than 150 years. You Must Be This Tall: The Story of Rocky Point Park uses vintage photographs and first-person accounts of Rocky Point Park, told by those who lived, worked, and played there. Award-winning filmmaker David Bettencourt will be in our studio.

Rumor has it, David is bringing along a couple of secret guests - fans of Rocky Point Park. Just who will these guests be? Tune in to find out!

Meanwhile, backstage at the studio, the folks from B&M Catering Company will keep our volunteers well-fed, with a special dinner menu reminiscent of Rocky Point favorites. (Thank you!)