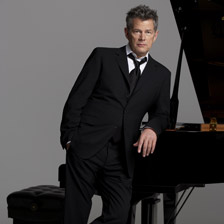 Recorded live in performance at Las Vegas’ Mandalay Bay Events Center, Hitman: David Foster & Friends features Foster himself presiding center stage at the keyboard. The evening is a virtual jukebox worth of songs written by and/or produced by him. Kenneth “Babyface” Edmonds and brother Kevon offer “I Swear”; Brian McKnight revisits Earth, Wind and Fire’s “After the Love Has Gone”; former Chicago front man Peter Cetera gets down with “Hard to Say I’m Sorry,” “You’re the Inspiration” and “Glory of Love”; while Boz Scaggs reprises “Look What You’ve Done to Me” from Urban Cowboy.

Also look for American Idol’s Katharine McPhee soloing on “Somewhere,” then joining Italian tenor Andrea Bocelli for “The Prayer”; Bocelli’s silky “Amapola”; Bublé and country music’s Blake Shelton duet of Bublé’s “Home,” and new Foster discovery William Joseph at the keyboard for “Asturias.” And if Josh Groban brings the house down with signatures “Bridge Over Troubled Water” (in duet with Brian McKnight) and “You Raise Me Up,” the scene-stealer award would have to go to 16-year-old power-house Charice, from the Philippines. Best known in America for her appearances on The Oprah Winfrey Show, she stuns both audience and Foster with the Whitney Houston-by-way-of-Dolly Parton hit “I Will Always Love You.”

Posted by WSBE Rhode Island PBS at 9:03 AM