"Where They Slept" Visits Slave Quarters in Rhode Island 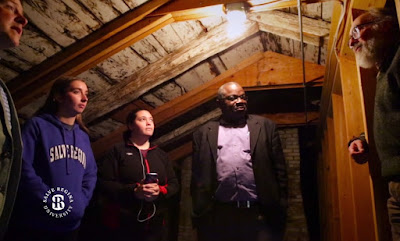 Dr. Jon Marcoux (far left in photo) and three of his students in the Noreen Stonor Drexel Cultural and Historic Preservation program at Salve Regina University joined historian and preservationist Joseph McGill for an overnight stay at Smith's Castle in North Kingstown, RI. It was no usual sightseeing tour; they did it for a close-up examination of where slaves lived on the site in the 17th and 18th centuries.
Robert Geake, historian and docent at Smith's Castle, led the small group through a fascinating but little-told recounting of life on the farm, including how items like cheese and cider were produced by enslaved laborers, all of whom slept in the locked attic of the house.

Joseph McGill, founder of the Slave Dwelling Project, travels around the country to bring attention to preservation of extant slave dwellings and the pubic interpretation of the history of the enslaved.

Rhode Island PBS presents Where They Slept on Sunday, February 28 at 6 p.m. as part of our ongoing series Rhode Island Stories, a collection of local independent films.