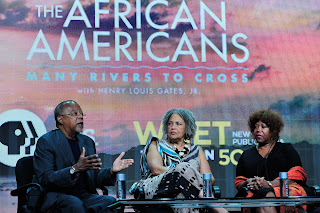 Written and presented by Henry Louis Gates, Jr., the six-hour series African Americans: Many Rivers to Cross explores the evolution of the African-American people, as well as the many cultural institutions, political strategies, and religious and social perspectives they developed - forging their own history, culture and society against unimaginable odds. Rhode Island PBS will present the six episodes on three consecutive Thursdays at 8 p.m. and 9 p.m., beginning February 4, 2016.
Starting with the origins of slavery in Africa, the series moves through five centuries of remarkable historic events right up to the present - when America is led by a black president, yet remains a nation still debating race.
Traveling throughout the United States, viewers go on an engaging journey through African-American history, visiting key historical sites, lively debates among some of America's top historians, and interviews with living eyewitnesses, including school integration pioneers Ruby Bridges and Charlayne Hunter-Gault, former Black Panther Kathleen Neal Cleaver, former Secretary of State Colin Powell, and many more.
Click for more information about the series.