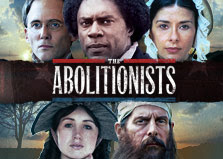 Men and women, black and white, Northerners and Southerners, poor and wealthy, these passionate antislavery activists fought body and soul in the most important civil rights crusade in American history. What began as a pacifist movement fueled by persuasion and prayer became a fiery and furious struggle that forever changed the nation.
Bringing to life the intertwined stories of Frederick Douglass, William Lloyd Garrison, Angelina Grimké, Harriet Beecher Stowe and John Brown, The Abolitionists takes place during some of the most violent and contentious decades in American history, amid white-hot religious passions that set souls on fire, and bitter debates over the meaning of the Constitution and the nature of race. The documentary reveals how the movement shaped history by exposing the fatal flaw of a republic founded on liberty for some and bondage for others, setting the nation on a collision course. In the face of personal risks -- beatings, imprisonment, even death -- abolitionists held fast to their cause, laying the civil rights groundwork for the future and raising weighty constitutional and moral questions that are with us still.

Part One (Thursday, January 17 at 9 p.m.)
The opening hour of The Abolitionists features the documentary's five principal characters, whose intertwined lives and shared beliefs came together to form a powerful movement that forever changed the nation.
In the 1820s and 30s, Frederick Douglass was a young slave growing up in Maryland who became hopeful when he heard about abolitionists and their push to end slavery.
William Lloyd Garrison found his life's purpose in the crusade against slavery, founding the newspaper The Liberator in 1831. The paper would become a powerful voice for the movement.
Angelina Grimké, the outspoken daughter of a wealthy Charleston, South Carolina plantation family, abandoned her life of privilege and moved to the North in 1829, where she would become a persuasive and authentic public speaker against slavery.
In 1833, Harriet Beecher Stowe witnessed the brutality of slavery in her first trip to the South. The searing memory of what she saw changed her forever and impacted her greatest work,Uncle Tom's Cabin.
Multiple business failures coupled with the murder of an antislavery activist in 1837 galvanized John Brown, and he devoted the rest of his life to the cause.
By 1840, the growing abolitionist movement these activists helped create had fragmented; increasing violence had raised doubts as to the efficacy of its pacifist tactics.
Part Two  (Thursday, January 24 at 9 p.m.)
In 1838, Frederick Douglass escaped slavery, eventually joining William Lloyd Garrison in the antislavery movement. In the North, Douglass became a powerful orator, and reached tens of thousands more with the 1845 publication of his autobiography. When threatened with capture by his former owner, Douglass fled to England, where he experienced life as a free man for the first time. Returning to the U.S. in 1847, he launched his own antislavery paper, The North Star, out of Rochester, New York, causing a rift with his mentor Garrison. Later that year, John Brown met with Douglass in Springfield, Massachusetts, and revealed his radical plan to raise an army, supply them with arms, and free the slaves. Douglass did not share Brown's enthusiasm for such violent tactics.
In 1852, following the tragic death of her own young son and moved by the plight of slave families being torn apart by the Fugitive Slave Law, Harriet Beecher Stowe published Uncle Tom’s Cabin. An instant best seller that became wildly successful as a play, this influential fictional story helped change the hearts and minds of millions of Americans by depicting slavery through the eyes of its victims.
In the spring of 1854, fugitive slave Anthony Burns was held in Boston's city jail, where he became a focal point for both pro- and antislavery advocates. Angry Bostonians attempted to free him, but President Franklin Pierce, an ardent Southern sympathizer, sent in the military to escort him to a ship in the harbor and eventually back to enslavement.
All the attempts at compromise and resolution had only deepened the divide between North and South, touching off a crisis that was about to careen out of control.
Part Three  (Thursday, January 31 at 9 p.m.)
By 1854, the battle over admitting new territories to the Union had reached a fever pitch. Kansas was the front line of a bloody battle between pro-slavery and free-soil contingents. In 1859, John Brown summoned Frederick Douglass to a secret meeting in Chambersburg, PA, and revealed his plan to capture the federal armory at Harpers Ferry, VA, and start a revolution; Douglass refused to join him. Brown went ahead with the raid, and was injured and captured. Before being executed, he managed to turn himself into a public figure and a martyr for the cause.
In 1860, Abraham Lincoln was elected president. As Southern states seceded from the Union, the country continued its descent into chaos, and by the following spring, the Civil War had begun. What was almost universally expected to be a quick and bloodless conflict dragged on. On the 22nd of September 1862, news broke that Lincoln would sign the Emancipation Proclamation. For Lincoln, the carnage was unendurable unless it could be given over to a higher purpose.
On New Years Day 1863, Bostonians gathered at two celebrations: William Lloyd Garrison and Harriet Beecher Stowe attended a concert at the Music Hall; Frederick Douglass was at Tremont Temple. Near midnight, the crowds erupted with joy when the announcement came that Lincoln has emancipated the slaves in rebel territory. Not only were slaves free, but African American men could now enlist in the Union forces. Two of Douglass' sons went to war; and even William Lloyd Garrison, the "ultra peace man," allowed his first born to sign up.
In December 1865, the Thirteenth Amendment was ratified, banning slavery in all the states -- forever. For almost four decades, the abolitionists had dedicated their lives to this moment. It is a triumph of perseverance, of steadfastness, and in the logic and moral power of a movement that had never wavered.