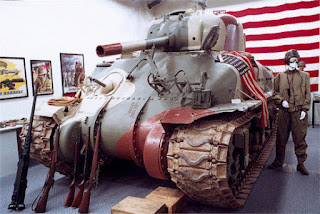 Over the course of five decades, Kenneth W. Rendell amassed the largest and most comprehensive private collection of original World War II memorabilia in the world. Directed by Tim Gray and narrated by Dan Aykroyd, World War II: Saving the Reality opens the doors to this private museum in Natick, Massachusetts.

Rendell, a South Boston native who lives in Wellesley, opened the 10,000-square-foot museum in 2004 and has filled it with 7,000 military and historical artifacts of World War II he has collected. He provides a guided tour of the museum's 30 exhibits, which chronicle the end of World War I and the rise of Nazism to the start of World War II and the fight in Europe and the Pacific.

The period artifacts, both small and large, include propaganda posters, Hitler Youth uniforms, Winston Churchill's original siren suit, French Resistance clothing and radios, spy gadgets, General MacArthur’s license plate, a Japanese admiral's uniform, Field Marshall Montgomery's signature beret and even a Sherman tank. Some of the museum's more significant documents include General Patton’s copy of Mein Kampf and his personal map of Sicily, the original order to drop the atomic bomb on Hiroshima and a revealing letter from Dwight Eisenhower to his wife.

Supplemented with archival photos and footage, the film also features interviews with more than 50 World War II veterans, civilians and Holocaust survivors who offer absorbing first-person accounts of these historical events and speak to the complexities, moral ambiguities and emotional toll of the war.