Downton Abbey, Season 3 Preview at the Park Theatre in Cranston 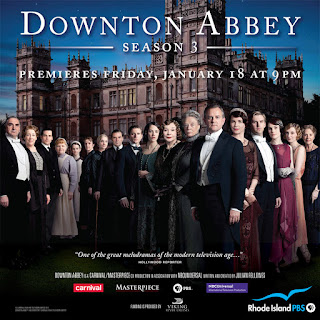 The long-awaited Season 3 of Downton Abbey on Masterpiece premieres Friday, January 18 at 9 p.m. on Rhode Island PBS. But fans of the international television sensation can get a sneak peek of the new season before the series makes its American television debut.

David W. Piccerelli, president and CEO of Rhode Island PBS announced the pre-screening party is sold out, but that 350 tickets are available for the free public screening at 7:30 p.m. Tickets must be picked up at the Park Theatre box office in advance of the January 3 show.

"We – as much as the fans – are eagerly awaiting the new season of Downton Abbey," said Piccerelli. "The response to the series has been amazing."

"We are happy and honored to work with Rhode Island PBS to bring this Downton Abbey preview to the 'big screen,'" said Yusuf Gandhi, director of programming at The Park Theatre.

Guests are asked to bring non-perishable food items or canned goods on the night of the show, in a post-holiday food drive to benefit the Rhode Island Community Food Bank.

"The holidays are a time of year when we remember the needs of our neighbors and respond generously," said Gandhi. "Unfortunately, hunger does not come and go with the holiday decorations - there are local families facing hunger and food insecurity all year long."

Collection boxes for food donations will be located in the Park Theatre lobby.

Written and created by Julian Fellowes, Downton Abbey won an impressive six Primetime Emmy® Awards and a Golden Globe® in its first season. Recent honors for Season 2 include 16 Primetime Emmy® nominations, multi-category nominations from the Critics’ Choice Awards and from the Television Critics Association. Viewers were no less passionate, with 17.1 million tuning in across the seven episodes, making Downton Abbey, Season 2 the most-watched Masterpiece series on record.

Downton Abbey, Season 3 is a Carnival/Masterpiece Co-production, in association with NBCUniversal. It is written and created by Julian Fellowes. Gareth Neame and Julian Fellowes are Executive Producers. The Producer is Liz Trubridge. The first two episodes are directed by Brian Percival, who won an Emmy® Award for his direction of season one. Other episodes are directed by Andy Goddard, Jeremy Webb, and David Evans.

About The Park Theatre
The Park Theatre is a state of the art, multi-purpose performing arts center, with plush, comfortable seating for approximately 1,000 for concerts, comedy, theatrical performances, speakers, opera, dance recitals, children’s and family shows, movies, sports, presentations and remote entertainment through the theatre’s satellite-enabled HD projector, and other special events. The Park Theatre complex also includes the Stage Door Restaurant and Lounge, as well as a restaurant and banquet hall that can double as a conference and meeting center. Free parking is available for all events behind Cranston City Hall.

About Rhode Island PBS
WSBE Rhode Island PBS is operated by the Rhode Island PBS Foundation, a non-profit 501(c)(3) organization, established in 1987 as a public charity to raise funds and provide support services for Rhode Island’s public television station. WSBE-DT is a viewer-supported member of the PBS network of public broadcasting stations, and transmits on two channels: Rhode Island PBS (digital 36.1) and Learn (digital 36.2). Committed to lifelong learning for 45 years, WSBE Rhode Island PBS uses the power of noncommercial media to educate, engage, enrich, inspire, and entertain viewers of all ages in Rhode Island, southeastern Massachusetts, and eastern Connecticut. For more information about the programs and education services at WSBE, visit www.ripbs.org.