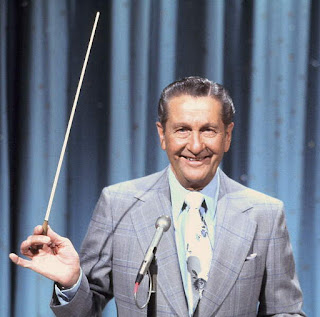 A major television milestone was marked earlier this fall when The Lawrence Welk Show celebrated the beginning of 25 years of Champagne Music on public television. Viewers of WSBE Rhode Island PBS will have the opportunity to watch the rarely seen 1955 premiere episode of The Lawrence Welk Show in a special presentation on Sunday, November 27, 2011 at 6:30 P.M.

Since 1987, more than 2.5 million fans of the longest-running, weekly-syndicated music/variety series have been tuning in each week to their local PBS station to watch Lawrence Welk and their favorite “Musical Family” members sing and dance.

The Lawrence Welk Show was first broadcast in 1951 on KTLA in Los Angeles. In 1955, the ABC network picked it up for national broadcast. When ABC dropped the series in 1971 after running successfully for 16 years, Welk persevered by forming his own production company and began syndicating it directly to commercial stations individually. It stayed on the air in weekly national syndication until 1982, often reappearing each December with new Christmas specials until 1985.

At first, Allen said, some station executives were unsure. “Some thought Lawrence Welk’s accent was corny,” recalling Welk’s Russian-German-inflected speech. “But, when their station raised record pledges and dollars from the Welk special, they realized there were a wealth of loyal fans and viewers in their audience that were underserved and signed up for the weekly series.”

Welk’s mature audience, Allen said, was suited for non-commercial public television. “Commercial stations weren’t interested in the older demographic because that group is set in their purchasing preferences. They’re not likely to change even their toothpaste. But on the other hand, they’re more likely to donate money to support their interests, he said. “And once they make a pledge to public television, they fulfill it…and they’ve been fiercely loyal to The Lawrence Welk Show for a record 25 years.”

“My father was very successful with his ideas and vision,” his son Larry Welk said. “He had wonderful gut feelings for certain things and he knew what viewers wanted to hear and he made sure they played and sang that kind of music each week. He hired fabulous musicians and wonderful singers and dancers. I think that’s why the show is still on the air and still so popular with the fans.”

Encores of the weekly TV show, garnered from more than 1,000 episodes taped between 1955 and 1982, are now hosted by Welk Stars Mary Lou Metzger and Bobby Burgess and are broadcast on more than 270 public television stations.

The Lawrence Welk Show airs weekly on WSBE Rhode Island PBS on Sundays at 7 P.M. and Saturdays at 6 P.M.