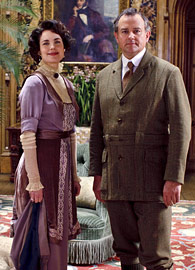 On Friday after Thanksgiving, when dinner is over and savory leftovers are on the menu, relax with WSBE and delve into the intrigue on the estate...

Join us at 5 P.M. for a 6-hour marathon of Downton Abbey. We're airing all of the episodes back-to-back in anticipation of the brand new series of episodes premiering in January. (It's a golden DVR opportunity if ever there was one!)


The Downton Abbey estate stands a splendid example of confidence and mettle, its family enduring for generations and its staff a well-oiled machine of propriety. But change is afoot at Downton — change far surpassing the new electric lights and telephone. A crisis of inheritance threatens to displace the resident Crawley family, in spite of the best efforts of the noble and compassionate Earl, Robert Crawley (Hugh Bonneville, Miss Austen Regrets); his American heiress wife, Cora (Elizabeth McGovern); his comically implacable, opinionated mother, Violet (Maggie Smith, David Copperfield); and his beautiful, eldest daughter, Mary, intent on charting her own course. Reluctantly, the family is forced to welcome its heir apparent, the self-made and proudly modern Matthew Crawley (Dan Stevens), himself none too happy about the new arrangements. As Matthew's bristly relationship with Mary begins to crackle with electricity, hope for the future of Downton's dynasty takes shape. But when petty jealousies and ambitions grow among the family and the staff, scheming and secrets — both delicious and dangerous — threaten to derail the scramble to preserve Downton Abbey. Created and written by Oscar-winner Julian Fellowes (Gosford Park), Downton Abbey offers a spot-on portrait of a vanishing way of life.

Here's a short preview of the new season of Downton Abbey from PBS.  (Please note: We will soon announce our premiere date, which may not be January 8. )

THIS is quite a preview!