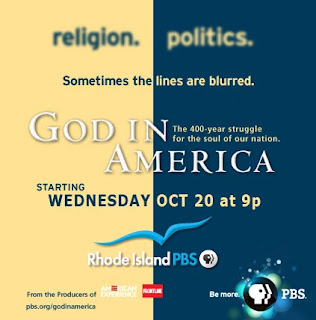 WSBE Rhode Island PBS airs a new 6-hour PBS series from the producers of American Experience and Frontline: God in America at 9 PM on three consecutive Wednesdays, October 20, October 27, and November 3 (with series re-broadcast at 1:30 AM on October 22, October 29, and November 5.)
What follows is the introduction to an interview with the producers of the documentary, Michael Sullivan and Marilyn Mellowes, courtesy of pbs.org:

What was the genesis of God in America? Why take on this subject now?

You don't need to look any further that today's political/religious controversies -- over President Obama's personal faith, plans to build an Islamic center in lower Manhattan, or threats by a Florida pastor to burn copies of the Quran -- to sense the relevance of a series on how religious ideas and spiritual experience shaped America's public life.

However, the genesis of God in America did not occur in the crucible of today's headlines, but during a conference WGBH convened several years ago to discuss, with a room full of scholars and thinkers about religion, what direction public broadcasting could take to do more about the role of religious faith for an American audience.

The consensus at that conference was that America had a religious literacy problem. Several scholars define the problem this way: "Although many Americans are deeply religious, man can also be profoundly ignorant about religion -- about other faiths and sometimes even their own, as well as the religious history of the country."

Out of that conference five years ago came the idea for God in America -- to tell the often-neglected historical story of how religious ideas and spiritual experience shaped the public life of the country.

And undergirding the effort is a simple idea: In America, religion matters. In American history, it has always mattered, and we can't fully understand the American story without also understanding our religious history.

The rest of the interview...