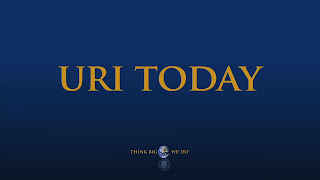 In one of this URI Today episode's three segments, meet the man behind the mic - the man for all seasons, Rhode Island Radio Hall of Fame member Jim Norman. The voice of the Rams, he called 1,286 consecutive URI football and men’s basketball games in his 34-year career behind the microphone. Read more about Jim here.

In the second segment, why would grown men and women chase horseshoe crabs in the moonlight? To study them, of course! The horseshoe crab segment focuses on URI faculty and students conducting late-night studies of the well-known armored creatures at Napatree Point in Westerly, where the animals arrive in early summer to lay their eggs. It will feature interviews with the researchers as they count and tag the crabs.

Then, a five year journey has come to a happy conclusion on upper college road, and the opening of the Gender and Sexuality Center is putting the University of Rhode Island on the map as the first in the country.

At 6:30, we encore the second episode of URI Today "The Science of Survival," which examines innovative work being done by the University of Rhode Island in immunology and ecology. The program explores the threat of Dengue fever and the search for a vaccine against this deadly disease. The show also looks at what role sea level rise may have played in the damage caused by Super Storm Sandy.

The series is co-produced by the New Media unit of URI’s Department of Marketing and Communications and Ocean State Video.