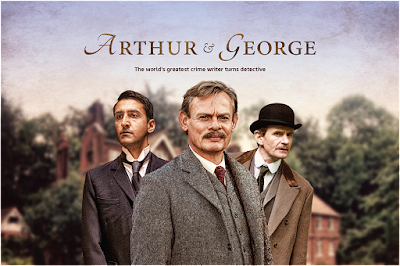 Co-starring are Arsher Ali (The Missing) as George Edalji, a mixed-race solicitor living in the English Midlands; Art Malik (Upstairs Downstairs) as his Indian father, an Anglican minister; and Emma Fielding (Cranford) as his Scottish mother. Also appearing are Charles Edwards (Downton Abbey) as Alfred Wood, Sir Arthur’s private secretary; and Hattie Morahan (Sense and Sensibility) as Jean Leckie, the woman that Doyle befriended while his wife was gravely ill.

Arthur & George opens with the illness and death of Doyle’s wife, Louisa. Sir Arthur is at a low ebb-until he receives a letter from the recently paroled George, who wants the world-renowned author of Sherlock Holmes to help him clear his name so he can resume his legal career.

The Edalji case saw an improbable defendant, mild-mannered lawyer George Edalji, convicted for mutilating a pony and, by implication, a host of other farm animals in a slashing spree known as the Great Wyrley Outrages. The anonymous misdeeds also included poison pen letters and intimidation aimed, oddly enough, at George’s family.

The three-part drama won plaudits from the press during its recent UK broadcast, with The Sunday Telegraph (London) hailing it as “thoroughly enjoyable ... Clunes proves exceptionally winning as the widowed writer and sometime crusader for justice, Arthur Conan Doyle, who finds a new zest for life when he comes across the curious case of George Edalji.”
Arthur & George is adapted from Julian Barnes’s acclaimed novel of the same name, which was a finalist for the Man Booker Prize, the most prestigious literary award in the English-speaking world.