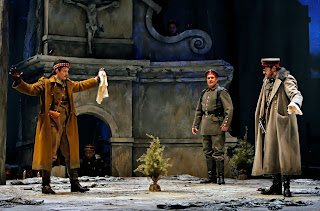 This opera recounts the true story of the World War I Christmas Eve truce. For one magical evening on December 24, 1914, French, German and British soldiers laid down their arms and joined in a spontaneous celebration reflecting the peace, fellowship and humanity of the season.

Based on the Academy Award-nominated film Joyeux Noel, this two-act production was commissioned by the Minnesota Opera and premiered in November 2012 to national acclaim, including a Pulitzer Prize for Music for composer Kevin Puts. With a libretto by Mark Campbell, "Silent Night" is sung in French, English, German, Italian and Latin with English subtitles.

Rhode Island PBS premieres Silent Night at 8 p.m. on Thursday, December 19, with re-broadcast at half after midnight and again at noon on Saturday, December 21.