Get ready for an unexpected and heartwarming treat this holiday season, coming to Rhode Island PBS Christmas Eve and Christmas morning. Mr. Stink, a feature-length drama adapted from the popular children’s novel written by David Walliams, will air at 1 p.m. and 8 p.m. December 24, and at 5 a.m. December 25.

Downton Abbey’s Hugh Bonneville stars as Mr. Stink, a homeless man who is befriended by a lonely twelve-year-old girl named Chloe who invites him to live in the shed at the end of her family’s garden. It’s a role that seems to be about 180 degrees removed from the ultra posh Robert, Earl of Grantham, which is part of the reason it should be so fun to watch.

The film description according to the official press release: 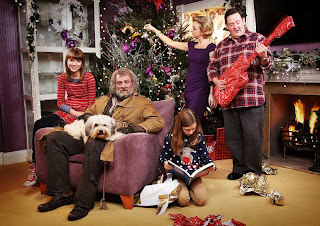 Chloe (played by Nell Tiger Free) sees Mr. Stink every day, but she’s never spoken to him, which isn’t surprising, because he’s a tramp — and he stinks. But before she knows it, Chloe has an unusual friend hiding in her garden shed when it seems Mr. Stink and his stinky dog, Duchess, might be driven out of town.

As Chloe struggles to make sure no one sniffs out Mr. Stink, she also has to cope with an overbearing mum who is more interested in her own political ambitions than her daughter, her put-upon dad who has a secret of his own, her “perfect” younger sister, Annabelle, and the nasty girls who make her life miserable at school.

There is also one other person with an extraordinary secret, as it turns out that there is more to Mr. Stink than meets the eye ... or nose.