Bristol's 4th of July: A Celebration of History and Independence 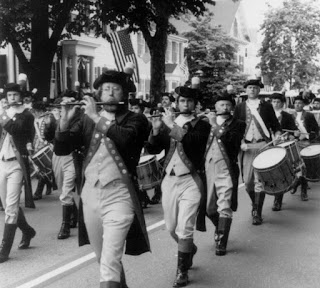 The red, white, and blue lines in the middle of Hope Street are freshly repainted and the porches and doorways of the historic homes will soon be festooned with bunting, flags, and swags of stars and stripes. It’s the spirit of Bristol, Rhode Island, “America’s Most Patriotic Town,” and home of the longest running Independence Day celebration in the country.

Rhode Island PBS film crew captured the behind-the-scenes preparations for the 2007 Fourth of July celebration, and traced the origins and evolution of more than 225 years of commemorative ceremonies and traditions. Bristol’s Fourth of July: A Celebration of History and Independence was produced by Bristol native Mary Lou Palumbo, and will air on Thursday, July 4 at 7 p.m., and on Saturday, July 6 at 7 p.m. and Sunday, July 8 at 11 p.m., as part of the ongoing Rhode Island PBS series, Rhode Island Stories.

Vintage photos and archival film take viewers back in time to witness some of the early observances. The documentary also explores the origins of the patriotic exercises, the historic parade, the Miss Fourth of July pageant, and other key events and ceremonies, and why the tradition is still going strong more than two and a quarter centuries later.