A Capitol Fourth and more on Rhode Island PBS

Live on Rhode Island PBS from the West Lawn of the U.S. Capitol, A Capitol Fourth - America's favorite Independence Day celebration - will feature unrivaled performances from some of the country's best-known musical artists, topped off by the greatest display of fireworks anywhere in the nation. Twenty television cameras will be stationed around Washington, D.C. to capture the sights and sounds of the concert, making at-home viewers feel like they are front and center for the show on July 4 starting at 8 p.m. 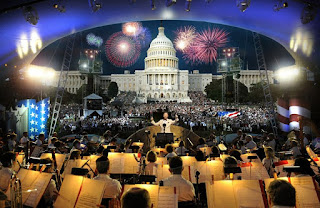 In celebration of America’s 237th birthday, the show will be capped off with a rousing rendition of Tchaikovsky’s 1812 Overture complete with live cannon fire provided by The United States Army Presidential Salute Battery, an audience favorite and now an A Capitol Fourth tradition. Also participating in the event will be The Choral Arts Society of Washington, along with The U.S. Army Herald Trumpets, The U.S. Army Ceremonial Band, Members of the Armed Forces carrying the State and Territorial flags and the Armed Forces Color Guard provided by the Military District of Washington, D.C.