TONIGHT: Alone in the Wilderness and Alaska Silence & Solitude 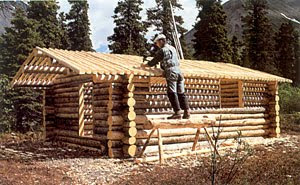 WSBE Rhode Island PBS will air this fascinating glimpse into solitude and survival TONIGHT August 31 at 7:30 PM, followed by the second in the series of three films about Proenneke's adventures, Alaska: Silence & Solitude at 9 PM.

Alaska: Silence & Solitude, filmed 20 years later, is the follow-up film to Alone in the Wilderness. Bob Swerer and Bob Swerer, Sr. produced the film in 1998, documenting their visit with Dick Proenneke at his famous cabin on Twin Lakes where the wildlife is still abundant and the scenery is spectacular.