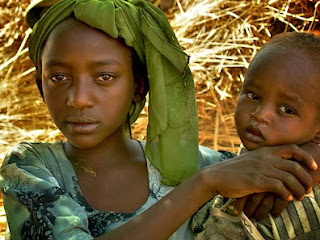 The journey of a family that spent more than five years in an Ethiopian refugee camp before relocating to Rhode Island is the focus of the upcoming documentary, Home Across Lands.

Home Across Lands was commissioned by the International Institute to chronicle the journey of a group of Eritrean-Kunaman refugees making the transition from life in the Shimelba Refugee Camp in Northern Ethiopia to their new home in Rhode Island.

The Kunama featured in the film fled their native Eritrea and spent years in the confines of the camp, until they were granted refugee status by the United Nations High Commissioner for Refugees. The film focuses on their journey to Rhode Island and their journey to becoming self-reliant, invested participants in their new home.

The film was shot over a one year period and features footage and interviews from various locations in Ethiopia and Rhode Island. The experience for the filmmakers was a challenging one as the U.S. State Department had issued a warning for travelers within 50 km of the border between Ethiopia and Eritrea. The refugee camp was located 45 km south of the Eritrean border.

“Our goal was to present viewers with a first-hand visual representation of the journey, while giving a voice to those who live in the camp,” said director John Lavall, who produced the one hour documentary in conjunction with executive producer Mary Copp, cinematographer Jessica Jennings, and editor Julie Lewis/editor.

The film takes viewers on the odyssey from the camp on the arid northern border of Ethiopia and Eritrea to Rhode Island’s Spring House Hotel and Resort on Block Island. Home Across Lands illustrates the ways the International Institute bridges the vast divide from life in a refugee camp to life in Rhode Island as they help the Kunama in making sense of apartment living, public transportation, employment and health care, while nurturing their own community as they adapt to a larger and very foreign one.

Home Across Lands is a production of Devlo Media and Vision Wink Films. For more information, visit www.devlomedia.com or www.iiri.org.