Every year, we receive several requests to air this documentary. This year in particular - marking the 75th anniversary of the "New England Express" - we are most proud to present Wake of '38, the documentary that won an EMMY (R) award for WSBE.

Produced by WSBE ("Channel 36" then, "Rhode Island PBS" now), Wake of '38 uses archival newsreel and home movie footage, as well as the vivid recollections and eyewitness accounts to tell the story of the nameless hurricane that careened through southern New England on September 21, 1938. An annual "favorite," Wake of '38 debuted in 1978, marking the 40th anniversary of the storm. We proudly air it on Saturday, September 21 at 11 p.m.

It's estimated the hurricane killed between 680 and 800 people, damaged or destroyed more than 57,000 homes, and caused property losses estimated at US$306 million ($4.7 Billion in 2013 dollars). As noted in the quoted account below, the greatest death and damage toll came in the storm surge that followed. Downtown Providence still has buildings that are scarred by the water lines, some 13 feet above ground level.

The unnamed hurricane of 1938 remains the most powerful and deadliest hurricane in recent New England history, eclipsed in landfall intensity perhaps only by the Great Colonial Hurricane of 1635. In 2012, Hurricane Sandy did more property damage in terms of dollars (despite its lower intensity at landfall); however, the 1938 storm still stands as the second costliest storm to strike New England.

From the New England office of National Weather Service division of the National Oceanic and Atmospheric Administration (NOAA) comes the following description of the Great Hurricane of 1938 (Source: http://www.erh.noaa.gov/box/hurricane/hurricane1938.shtml)


The Great New England Hurricane of 1938 was one of the most destructive and powerful storms ever to strike Southern New England. This system developed in the far eastern Atlantic, near the Cape Verde Islands on September 4. It made a twelve day journey across the Atlantic and up the Eastern Seaboard before crashing ashore on September 21 at Suffolk County, Long Island, then into Milford, Connecticut. The eye of the hurricane was observed in New Haven, Connecticut, 10 miles east of Milford. The center made landfall at the time of astronomical high tide, moving north at 60 mph. Unlike most storms, this hurricane did not weaken on its way toward Southern New England, due to its rapid forward speed and its track. This kept the center of the storm over the warm waters of the Gulf Stream.

Sustained hurricane force winds occurred throughout most of Southern New England. The strongest winds ever recorded in the region occurred at the Blue Hill Observatory with sustained winds of 121 mph and a peak gust of 186 mph. Sustained winds of 91 mph with a gust to 121 mph was reported on Block Island. Providence, Rhode Island recorded sustained winds of 100 mph with a gust to 125 mph. Extensive damage occurred to roofs, trees and crops. Widespread power outages occurred, which in some areas lasted several weeks. In Connecticut, downed power lines resulted in catastrophic fires to sections of New London and Mystic. The lowest pressure at the time of landfall occurred on the south side of Long Island, at Bellport, where a reading of 27.94 inches was recorded. Other low pressures included 28.00 inches in Middletown, Connecticut and 28.04 inches in Hartford, Connecticut.

The hurricane produced storm tides of 14 to 18 feet across most of the Connecticut coast, with 18 to 25 foot tides from New London east to Cape Cod. The destructive power of the storm surge was felt throughout the coastal community. Narragansett Bay took the worst hit, where a storm surge of 12 to 15 feet destroyed most coastal homes, marinas and yacht clubs. Downtown Providence, Rhode Island was submerged under a storm tide of nearly 20 feet. Sections of Falmouth and New Bedford, Massachusetts were submerged under as much as 8 feet of water. All three locations had very rapid tides increased within 1.5 hours of the highest water mark.


Rainfall from this hurricane resulted in severe river flooding across sections of Massachusetts and Connecticut. Three to six inches fell across much of western Massachusetts and all but extreme eastern Connecticut. Considerably less rain occurred to the east across Rhode Island and the remainder of Massachusetts. The rainfall from the hurricane added to the amounts that had occurred with a frontal system several days before the hurricane struck. The combined effects from the frontal system and the hurricane produced rainfall of 10 to 17 inches across most of the Connecticut River Valley. This resulted in some of the worst flooding ever recorded in this area. Roadways were washed away along with sections of the New York, New Haven, and Hartford Railroad lines. The Connecticut River, in Hartford reached a level of 35.4 feet, which was 19.4 feet above flood stage. Further upstream, in the vicinity of Springfield, Massachusetts, the river rose to 6 to 10 feet above flood stage, causing significant damage. A total of 8,900 homes, cottages and buildings were destroyed, and over 15,000 were damaged by the hurricane. The marine community was devastated. Over 2,600 boats were destroyed, and over 3,300 damaged. Entire fleets were lost in marines and yacht clubs along Narragansett Bay. The hurricane was responsible for 564 deaths and at least 1,700 injuries in Southern New England. Damage to the fishing fleets in Southern New England was catastrophic. A total of 2,605 vessels were destroyed, with 3,369 damaged.

During research for this blog post, these old photos were found in a WSBE file folder labeled Wake of '38. Amazing photos! Some of the photos did not have captions or other means of identification, but the captions that do appear here are reproduced from what was written on the original photos. 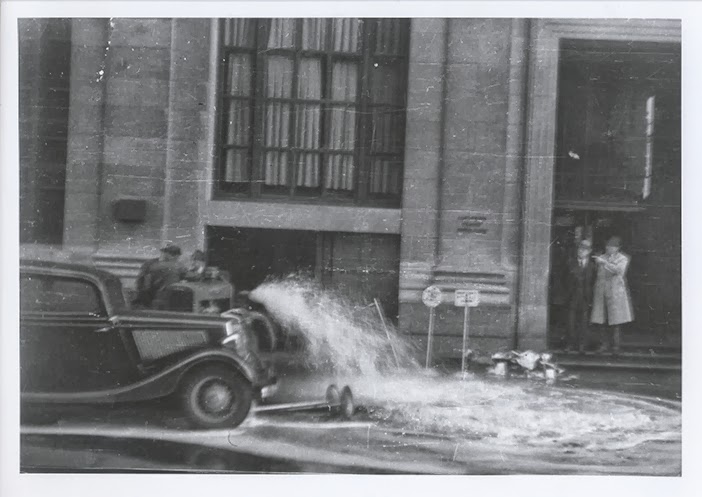 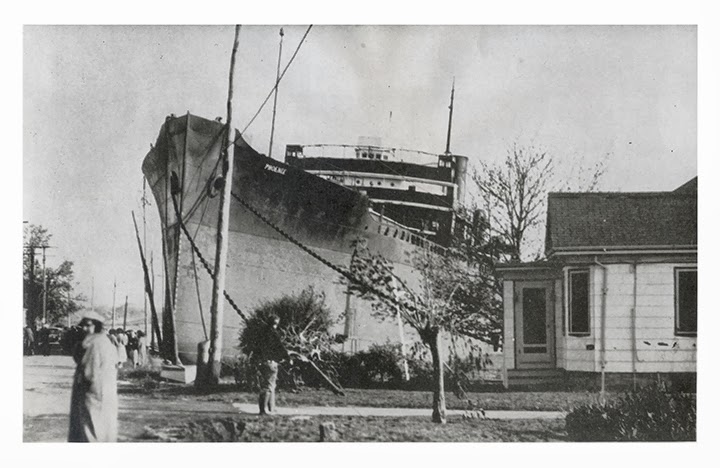 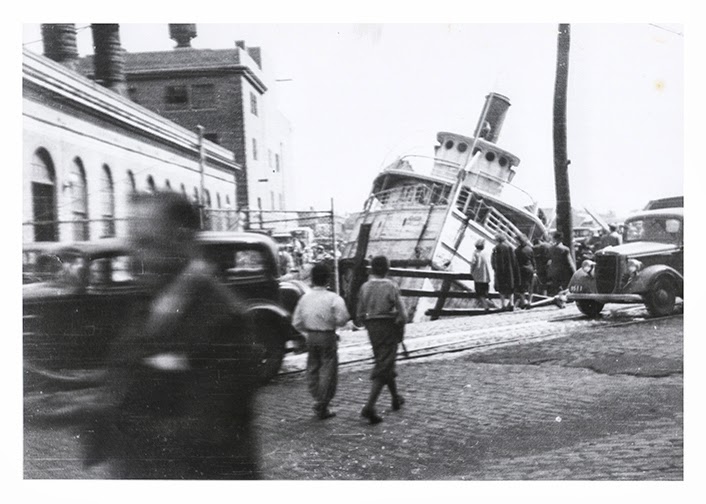