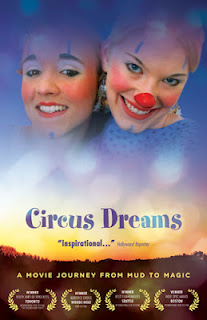 Mark your calendars and set your TiVos because Rhode Island PBS will show the fun and inspiring family film Circus Dreams on April 4 at 10 P.M. Winner of audience awards at film festivals from coast to coast- including Best Feature Film at the 2012 Providence Children’s Film Festival in February - Circus Dreams follows the adventures of a troupe of teens and 'tweens who astonish and delight audiences around New England on a Big Top Tour. The vibrant production captures the energy, perseverance, teamwork, and deep friendships at Circus Smirkus, the acclaimed Vermont-based youth circus, as the cast readies a brand-new show and takes it on the road for 70 performances in 14 towns over seven weeks. From the grueling training and rigorous rehearsals to the emotional final show of the season, Circus Dreams documents a magical summer for a group of extraordinary young people.

Featured players in Circus Dreams include best friends and clown partners Joy Powers and Maddy Hall who battle self-doubt and tradition as they aim to prove that “girls can be funny, too,” a mission that eventually sends one to the pinnacle of circus success. Juggler Jacob Tischler overcomes the isolation he’s experienced at home to find a place among kindred spirits. The magnetic supporting cast includes death-defying aerialists, two brothers on a quest to become the best diabolo jugglers in the world and Barrington, Rhode Island, native Spencer Novich, who delivers one of the funniest lines about life on Clown Alley. Novich went on to earn a degree in physical theater from New York University’s Tisch School of the Arts and today lives in Las Vegas, where he stars as the lead clown in Cirque du Soleil’s production, KA.

~*~*~*~*~
For the live experience, Circus Smirkus returns to Rhode Island this summer on its 25th anniversary tour. Circus Smirkus will perform at the Washington County Fairgrounds July 15-16, with four shows presented by and benefitting the Meadowbrook Waldorf School in West Kingston. For more information, visit www.smirkus.org.