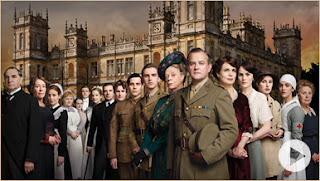 Downton Abbey's Granthams and their family of servants have already weathered scoundrels, scandals, and a momentous succession crisis. But by November 1916, the Great War has rendered everything — and everyone — changed. Even Downton Abbey itself, like its residents, has risen to the call of duty and transformed.

At the war front, life intensifies for Downton's young men in the face of untold horrors. Meanwhile, at Downton, war makes new and often unjust demands. Some rise to its call for a stiff upper lip and a useful turn, and others see change as an opportunity for either growth or exploitation. Far from the trenches, there remains no shortage of scheming, meddling, and dangerous attractions.

As other great houses crumble, a diminished Downton Abbey struggles to prevail into a new era with its residents and its honor intact.


~*~*~*~*~*~*~
Downton Abbey's Season Two heroes and villains, the loyalties and betrayals - all - are at least as gripping and engaging as Season One. And, of course, that gorgeous estate and those lavish costumes are as sumptuous as ever.

There is also word out of the United Kingdom that we can expect a season three of Downton Abbey! More on that as details surface.

Enjoy these preview clips. I hope they help keep you satisfied until the premiere on January 20 at 9 P.M. on WSBE Rhode Island PBS.