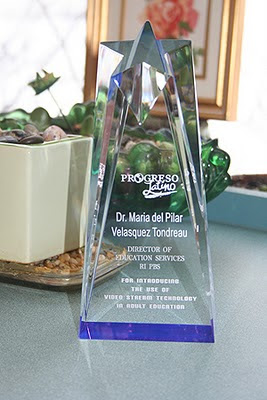 Dr. Maria del Pilar Velásquez de Tondreau, director of Education Services at WSBE Rhode Island PBS, has been a tireless advocate of both adult education and video streaming* since she arrived at the station in 2002.

The impact of Dr. Velásquez's commitment and effort was no more evident than on a cold evening in December. That night, a large group of tutors, volunteers, families and friends gathered to celebrate the graduation of 20 students in the Adult Education Program sponsored by Progreso Latino in Central Falls, Rhode Island. 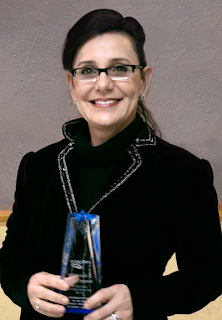 During the graduation ceremony, Progreso Latino Director Mario Bueno presented a special award to Dr. Velásquez for her efforts to introduce WSBE video streaming technology to the adult education program at Progreso Latino. In his presentation, Mr. Bueno remarked:


"When we started our educational initiatives in our GED classrooms in October 2009, we began to see the impact that this initiative had. Our students began using the video streaming technology to access curriculum-based content and GED content online that completed their regular classes, developing different activities, and improving their basic and technology knowledge and skills on a daily basis while using these new educational tools."

WSBE Rhode Island PBS offers hearty congratulations to all of the GED graduates from Progreso Latino, and warm thanks for recognizing the station's ongoing efforts to improve the quality of adult education in Rhode Island through the use of video streaming and digital media technology.

One of the 20 recipients of the GED certificate, Norma Herrera, shares her story of challenge and learning success in a testimonial spot that is part of the WSBE Rhode Island PBS My Source media impact and public awareness campaign. The spot, which also includes Bueno, can be seen on the air on WSBE Rhode Island PBS (digital 36.1) and WSBE Learn (digital 36.2), and online at www.ripbs.org/mysource.

*Streaming media technology - video streaming - enables the real time, or on-demand distribution of audio, video, and multimedia content over the Internet. Streaming media is the simultaneous transfer of the digital media (video, voice and data) so that it is received as a continuous real-time stream. Streamed data is transmitted by a server application and received and displayed in real-time by client applications such as the Microsoft's Windows Media Player or the QuickTime Player. These applications can start displaying video or playing back audio as soon as enough data has been received and stored in the receiving player's buffer. A streamed file is simultaneously downloaded and viewed, but leaves behind no physical file on the viewer's computer.