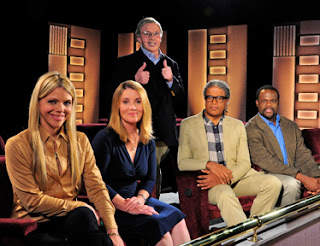 Roger Ebert Presents 'At the Movies' continues the movie review format first introduced by Gene Siskel and Ebert 35 years ago, and later continued by Ebert and Richard Roeper. In 1975, Siskel and Ebert launched "Opening Soon at a Theater Near You," renamed "Sneak Previews" in 1976. The program went on to become the highest rated entertainment show in PBS history. The original format moved into syndication as "At the Movies" in 1982 with Tribune Entertainment and, for a quarter-century, with Buena Vista Television.
In addition to reviewing new movies, the show will expand to cover New Media, special segments on classics, on-demand viewing and genres. Look for the legendary (and copyrighted) "Thumbs Up/Thumbs Down"® format made famous by Siskel and Ebert.

The program's principal co-hosts will be Christy Lemire, film critic of The Associated Press, and Elvis Mitchell, host of "The Treatment," distributed by KCRW public radio. Regular contributors and occasional co-hosts will be Kim Morgan of Los Angeles and Omar Moore of San Francisco, both respected and popular film bloggers.

Ebert will co-produce and will appear in every episode, in segments titled, "Roger's Office," devoted to classic, overlooked and new films. Having lost the ability to speak after extensive jaw cancer surgery, Ebert will employ a computer voice in his segment. He said he will not debate with the two co-hosts, "They'll be awarding the Thumbs, and you can't have three Thumbs."

Labels: At the Movies, Roger Ebert