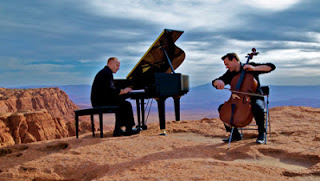 The concert special includes exclusive footage of the September 19, 2012 concert performed by the YouTube sensation to a sold-out crowd at the Red Butte Garden outdoor concert venue.

The Piano Guys, Steven Sharp Nelson on cello and Jon Schmidt on piano, perform such favorites as “Peponi,” an African version of Coldplay’s “Paradise” featuring singer Alex Boyé; their mash-up of the Bourne soundtrack with Vivaldi’s "Double Cello Concerto;" and a brand new cover of David Guetta’s “Titanium.”

While The Piano Guys produce beautiful music, they are best known for their interpretations of well-known favorites. For a mash-up of “Somewhere Over the Rainbow” and “Simple Gifts,” the American Heritage Lyceum Philharmonic and One Voice Children’s Choir accompanies the band. When performing Beethoven’s “Five Secrets,” groups of Philharmonic musicians planted in the audience stand up one by one to join in, playing their own instruments in an orchestral flash mob.


Also on the program are The Piano Guys' versions of Adele’s “Rolling in the Deep,” One Direction’s “What Makes You Beautiful,” Dave Guetta’s “Without You,” Christina Perri’s “Thousand Years” and “Bring Him Home” from Les Misérables. The concert special incorporates some of the duo’s YouTube videos such as “Cello Wars,” cellist Steven Sharp Nelson’s take on the Star Wars theme.

Curiously, the men came together over an advertising ploy for Anderson’s Piano Guys music store in St. George. Originally formed as an alternative means of promotion, Anderson’s store began producing the epic YouTube videos that characterize ThePianoGuys, and in the process, stumbled upon a musical sensation. ThePianoGuy's elaborate YouTube videos, showcasing stunning Utah locales, have received more than 160 million views. They grow 3,000 to 5,000 new YouTube subscribers a day and their channel gets 500,000 to I million views a day.

“Our passion is to put pianos and cellos in crazy locations,” says Paul Anderson. “We’ve had them on 1,000-foot cliffs, on moving trains and jumping out of planes. We love making these videos. Someone once asked us, ‘Where do you see yourselves in five years?’ We said, ‘If we can keep doing what we’re doing, that’s where we want to be.’”

They say their vision is to create music and videos that inspire and uplift. “We like to put a new spin on classic stuff and a classic spin on new stuff,” says Anderson. “Whatever we do, we put our heart and souls into every note and frame.”

Posted by WSBE Rhode Island PBS at 8:30 AM