In 1957, decades before Steve Jobs dreamed up Apple or Mark Zuckerberg created Facebook, a group of eight brilliant young men defected from the Shockley Semiconductor Company in order to start their own transistor business. Their leader was 29-year-old Robert Noyce, a physicist with a brilliant mind and the affability of a born salesman who would co-invent the microchip -- an essential component of nearly all modern electronics today, including computers, motor vehicles, cell phones and household appliances.

Few men have changed our everyday world of work, leisure and human communication in the way that Steve Jobs, Apple's former CEO, has done. The scope of his impact was evident in the outpouring of tributes from around the world — voiced on Twitter as well as through makeshift memorials in front of Apple stores — following his death, from complications of pancreatic cancer, on October 5, 2011. Steve Jobs – One Last Thing not only examines how his talent, style and imagination have shaped all of our lives, but the influences that shaped and molded the man himself.

The documentary takes an unflinching look at Jobs' difficult, controlling reputation and through interviews with the people who worked closely with him or chronicled his life, provides unique insight into what made him tick. Among those interviewed for the film are Ronald Wayne, co-founder of Apple Computer, Co. with Jobs and Steve Wozniak; Bill Fernandez, who is credited with introducing Jobs to Wozniak and was also Apple Computer's first employee; Robert Palladino, calligraphy professor at Reed College whose classes Jobs acknowledged with inspiring his typography design for the Apple Mac; Walt Mossberg, who covered Jobs as the principal technical journalist for The Wall Street Journal; Dean Hovey, who designed the mouse for Apple; Robert Cringley, who interviewed Jobs for his documentary Triumph of the Nerds; and Dr. Alvy Smith, co-founder of Pixar Animation Studios, which Jobs acquired in 1986. 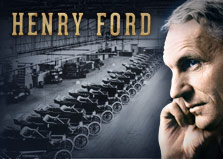 An absorbing life story of a farm boy who rose from obscurity to become the most influential American innovator of the 20th century, Henry Ford offers an incisive look at the birth of the American auto industry with its long history of struggles between labor and management, and a thought-provoking reminder of how Ford's automobile forever changed the way we work, where we live, and our ideas about individuality, freedom, and possibility.

Between 1914 and 1917 — prior to the United States' entry into World War I — more than 3,000 American volunteers, paying their own passage, set sail for France to aid the war effort. MODEL T's TO WAR focuses on the valiant work of the American Field Service, ambulance sections assigned to help the French Army in its fight against German forces. These young men drove Ford-built Model T's to the frontlines and saw their greatest glory in the battle of Verdun in 1916, when Field Service ambulances transported more than 250,000 wounded. Although American readers regularly followed the adventures of these brave ambulanciers through numerous accounts published in local and national newspapers of the era, few today know about their heroic deeds.

MODEL T's TO WAR seeks to shed light on this forgotten story. The film takes viewers on an archaeological journey of discovery — from French battlefield sites still littered with World War I artifacts to recently discovered silent-film footage and hundreds of previously unpublished war-time photographs.