Broadway or Bust: Do They Have What It Takes? 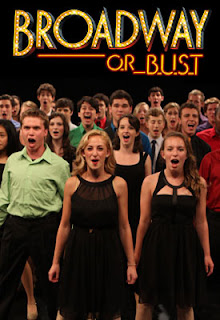 Do They Have What It Takes?

It's non-stop drama when 60 talented teens - chosen from a nationwide casting call of over 50,000 students - descend on New York for an intensive week of "theatrical boot camp" and a shot at stage stardom and scholarships. The annual event, held each summer, is filmed for the first time ever and airs three consecutive Thursdays at 10 P.M. beginning September 20, on Rhode Island PBS.


Part competition, part performance and part non-fiction drama, Broadway or Bust is the first-ever TV series to capture the behind-the-scenes coaching, grueling rehearsal schedule and highly charged atmosphere leading up to the National High School Musical Theater Awards (NHSMTA). Popularly known as "The Jimmy Awards" - named in honor of renowned Broadway theatre owner and producer James M. Nederlander - this national competition plunges the country's top teens into the eye of the theatrical storm for one intense, make-it-or-break-it week in New York City. The whirlwind competition culminates in an awards event on a Broadway stage in front of a live audience and a panel of high-profile judges.

Broadway or Bust airs as part of the PBS Arts lineup, a multiplatform commitment to make the arts accessible to all.

Inside scoop:
Deborah Cox and Constantine Maroulis, featured in Broadway or Bust, will be in Providence when they appear in the show, Jeckyl and Hyde, coming to the Providence Performing Arts Center in January.