It Gets Better: Coming Out for Change 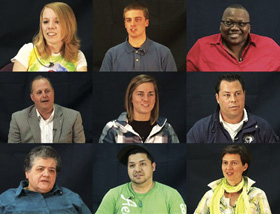 On April 14 at 7 P.M., WSBE Rhode Island PBS presents It Gets Better at URI: Coming Out for Change, a University of Rhode Island student-made film and phenomenon. The project started as idea by five members of the URI Lesbian Bisexual Transgender Queer (LBTQ) Women’s Group to make a small film to contribute to the national effort known as "It Gets Better," a support movement formed after highly publicized suicides of gay students.
But what started as an idea among women with no filmmaking experience blossomed unexpectedly to a full University-wide commitment to support students struggling with their sexual identity.

It Gets Better at URI: Coming Out for Change airs as part of the ongoing WSBE Rhode Island PBS series, Rhode Island Stories. After its debut on April 14, the documentary will be rebroadcast on Sunday, April 15 at 11 P.M. WSBE Rhode Island PBS transmits standard-definition (SD) and high-definition (HD) programming over the air on digital 36.1; on cable services: Cox 08 / 1008HD, Verizon 08 / 508HD, Full Channel 08, Comcast 819HD; on satellite: DirecTV 36, Dish Network 7776.

[Editor's Note: After this blog was published, we were informed the title of the film was changed to It Gets Better at URI: Coming Out for Change. Content has been updated, but to avoid breaking existing links in search engines, the blog title remains unchanged.]