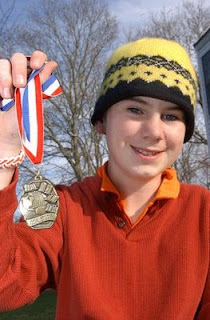 Up to 100 fourth- to eighth-graders in each of the 50 states, District of Columbia, U.S. territories and Department of Defense Dependents Schools have qualified for the state Bees. Oliver and the other state winners will receive $100, the "National Geographic Collegiate Atlas of the World," and an all-expenses-paid trip to Washington, D.C., for the national finals on May 19-20 and the chance to be crowned National Geographic Bee champion.

WSBE Rhode Island PBS will broadcast the National Geographic Bee on Thursday, May 21 at 3 PM, with re-broadcast on Saturday, May 23 at noon.

First prize in the national competition is a $25,000 college scholarship and lifetime membership in the National Geographic Society. Second- and third-place finishers receive $15,000 and $10,000 college scholarships. Additionally, the national winner will travel (along with one parent or guardian), all expenses paid, to the Galápagos Islands with "Jeopardy!" quiz show host and National Geographic Bee moderator Alex Trebek and the "Jeopardy!" Clue Crew. The winner will experience geography firsthand through up-close encounters with the wildlife and landscape of the Galápagos.

We won't know until the day before the actual air date whether Oliver will be among the final 10 (and be in the broadcast), but we'll post any update here as soon as we know. No spoilers, however!

Congratulations, Oliver! Best of luck in the next round!