Due to a last minute problem with the supplier of the book associated with Rhode Island's Historic Lighthouses, we regret we cannot air this program on Saturday, April 11 at 3 PM as scheduled. In its place, we will broadcast My Music: That's Amore! Italian American Favorites. Yes, it's completely different, but it's still great entertainment! Read about it below.

The schedule change also means Alone in the Wilderness will now begin at 4:30 P.M. Read about this show here. 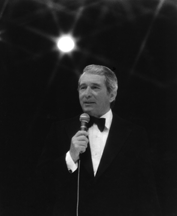 With a mixture of vintage clips and new concert performances, the latest edition of the MY MUSIC specials on PBS presents a poignant look back at the beloved crooners — and a couple of canaries — who symbolize the immense contribution of both Italian-American singers and the many hit songs of the 1940s-1970s that were influenced by the music-loving immigrants from Italy.

THAT’S AMORE: ITALIAN-AMERICAN FAVORITES is hosted by actor-singer Danny Aiello, who carries on the crooner tradition today with a rousing, contemporary performance of the evergreen “Some of These Days.”

Probably no other singer better recalls the easygoing popularity of the Italian crooner more than the late Perry Como, known as “Mr. C” to the millions who tuned in to his variety series and specials for over three decades. THAT’S AMORE: ITALIAN-AMERICAN FAVORITES opens with a pair of Como classics: “Till The End of Time,” a number one record from 1945, and “It’s Impossible,” a top-10 from 1970.

Julius LaRosa, an Italian-American hit-maker who continues to perform, offers a beautiful rendition of the standard “Three Coins in the Fountain,” as well as his playful 1953 smash “Eh Cumpari” and the traditional ballad “Domani.”

In footage from his final performance, the legendary Frankie Laine sings the heartfelt “That’s My Desire,” his first hit from 1947; the ageless Tony Martin returns to the stage with “There’s No Tomorrow,” his 1949 version of the Italian heirloom “O Sole Mio.”

The hippest segment of the Italian-American music scene is represented by the irrepressible Louis Prima, who breezes through “When You’re Smiling” and “Oh, Marie.” Other historical highlights from the vaults include Jerry Vale’s medley of “O Sole Mio”/“Mala Femmina”/”Come Back to Sorrento” and Eddie Fisher’s tender interpretation of “Oh! My Papa.”

Aged like fine wine, THAT’S AMORE: ITALIAN-AMERICAN FAVORITES spotlights a joyful tradition and musical heritage — part of the goal to preserve vital American music legacies on the MY MUSIC series, exclusively on PBS, and on Rhode Island PBS on Saturday, April 11 at 3 PM.