House of Shadows Appears Just in Time for Halloween 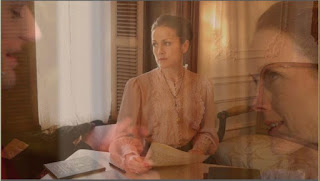 Just in time for Halloween, Rhode Island PBS premieres a new film, House of Shadows, by local filmmakers Michael and Karen Iacobbo of Providence Lyceum, LLC. Tune in Wednesday, October 28 at 10 p.m. for this one-night-only treat.

Filmed at some of Rhode Island’s most beautiful and important historical sites, the hour-long Gothic romance House of Shadows is inspired by the television series Dark Shadows. And, in fact,  actress Beverly Hayes, who plays Patience Silverfield, the 19th Century mistress of Silverfield Hall in House of Shadows, appeared in Dark Shadows.

Beautifully filmed as it moves between present day and 1893, the story explores the strange events that unfold - and the force that manifests - after the mansion in the family of famous Victorian poet Nathaniel Silverfield is taken by eminent domain in 2012 for a planned flood.

Click here for stills from the film, as well as more information about the filmmakers and some of their other projects.

Posted by WSBE Rhode Island PBS at 8:43 AM