No Hero in Heroin

**UPDATE** Scroll down to see the program in its entirety.


On Thursday, April 3, at 9 p.m., Rhode Island PBS takes a hard look at what Rhode Island health officials are calling an epidemic: the skyrocketing deaths by heroin overdose.

No Hero in Heroin presents a spectrum of perspectives on the story. Health officials, addiction counselors, recovering addicts, and family members put the intimate, human faces on the startling statistics. As of this writing, there have been 69 overdose deaths in Rhode Island since January 1, more than twice as many as last year.

What may be most surprising about this story is who is dying - and the profile might not be what you expect. Addiction too often begins with prescription drugs taken to soothe legitimate injury or pain. Opioids - most notably Oxycodone - are popular pain killers and are safe and effective on a short-term basis. But pain sufferers who take them for an extended period can become addicted. Some soon opt for the lower cost and wider availability of illicit drugs like heroin. These addicts are our neighbors, work colleagues, family members, or friends.

Off camera during the one-hour broadcast of No Hero in Heroin on April 3 only, addiction counselors will staff a phone bank in the Rhode Island PBS studios to answer viewers' questions about intervention and treatment referrals, and other addiction recovery information. Subsequent broadcasts will include referral phone numbers posted at the end of program.

No Hero in Heroin will air on: 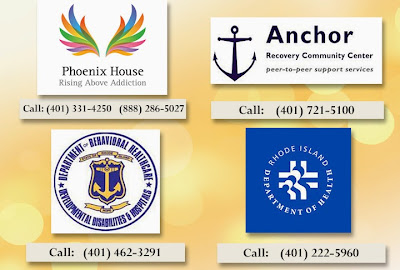