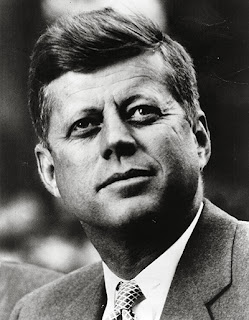 November 22 marks the anniversary of the assassination of President John Fitzgerald Kennedy - JFK. His murder in 1963 stunned the nation, and the documents and evidence about the events and people surrounding the incident were classified for 50 years.

On November 17 at 9 p.m., we air on Rhode Island PBS Secrets of the Dead: JFK: One PM Central Standard Time, the minute-by-minute chronicle of the assassination as it was revealed in the CBS newsroom from the moment the President was shot until Walter Cronkite’s emotional pronouncement of his death, one hour and eight minutes later. The drama of JFK: One PM Central Standard Time — the episode title is taken from the time President Kennedy was declared dead at Parkland Hospital — is played out amidst the chaos in Dallas, in the hospital, and in the CBS newsroom in New York. Included in the program will be moving memories from men and women who were with there on the day – in Dallas and New York.

On the anniversary November 22, we will air the brand new 4-hour story JFK: American Experience, starting at 11 a.m.

From the Web site:


Forever enshrined in myth by an assassin's bullet, Kennedy's presidency long defied objective appraisal. Recent assessments have revealed an administration long on promise and vigor, and somewhat lacking in tangible accomplishment. His proposals for a tax cut and civil rights legislation, however, promised significant gains in the months before his assassination. While maturation, as evidenced in the handling of the Cuban missile crisis, was apparent, the potential legacy of the New Frontier will forever be left to speculation.

Enjoy an extended preview of the American Experience program by clicking here. The compelling preview focuses on the 1960 presidential campaign.